Sleep Training and Sickness; What To Do When Baby Becomes Ill

Sleep training and sickness; how do we manage both?

It’s that time of year! I’m sick, my kids were sick, and my clients’ kids are getting sick. It’s by far my least favorite time of year.

Being ill yourself is one thing, but there is nothing worse than having a sick child. All you want to do is take it away and make them comfortable.

If only it were that easy!

One of the most common questions I get from my clients this time of year is “What do I do when I’ve started to sleep train and my child becomes sick?”.

Attempting to do anything with an ill child is not easy, let alone something like sleep training which can be a huge undertaking at the best of times!

For argument’s sake, let’s say you started to sleep train your 7 month old. After a week into shaping the routine, getting naps on track and having more consolidated night sleep, they became sick.

They suddenly struggled to sleep at night because of their high temperature, runny nose and cough. As a parent, all you wanted to do was help them to feel better and ease their discomfort.

But after being up all night with them trying to get them to sleep, you of course, became exhausted too.

You decided that because you both needed to get some rest, you would nurse them every time they woke the next night.

This way, they would be soothed and you would both quickly get back to sleep.

It was a win-win situation.

Or so you thought.

After 4-5 days, you may have noticed that your child was starting to get better. The flu like symptoms were going away, they were more comfortable and able to sleep much easier.

But just to be on the safe side, you continued to offer extra feeds for a few more nights and held them until they were asleep in your arms.

By the end of the week, your child was 100% back to being their normal, healthy self again.

Deciding to get back on track to sleeping through the night, you decided that the next night would be back to the regular routine.

But when you went to place them into their crib at night, they cried and protested at being put down awake, rather than being nursed to sleep.

Your child had formed a sleep association with feeding back to sleep while they were sick.

When your child becomes sick, you need to take care of them first and foremost. Their health and well being comes above all else.

But when tending to them and helping them sleep, sometimes we can inadvertently do a little too much in certain situations.

In the example above, the baby was probably fine to start being placed down awake by the fourth or fifth night. They were already enough into the sleep training process at that point (naps were starting to lengthen as was night sleep. This would indicate that the child was beginning to transition through sleep cycles on their own), that they had developed some independent sleep skills.

But by continuing to feed ‘just in case’ baby needed to be soothed, a sleep association around feeding to sleep, developed.

Now please note, this is neither right or wrong.

It’s just how the brain and sleep work.

Whatever state or environment is present when a child enters the first stages of sleep (stage one in the diagram below), is what they come to expect in order to re-enter another cycle later on. 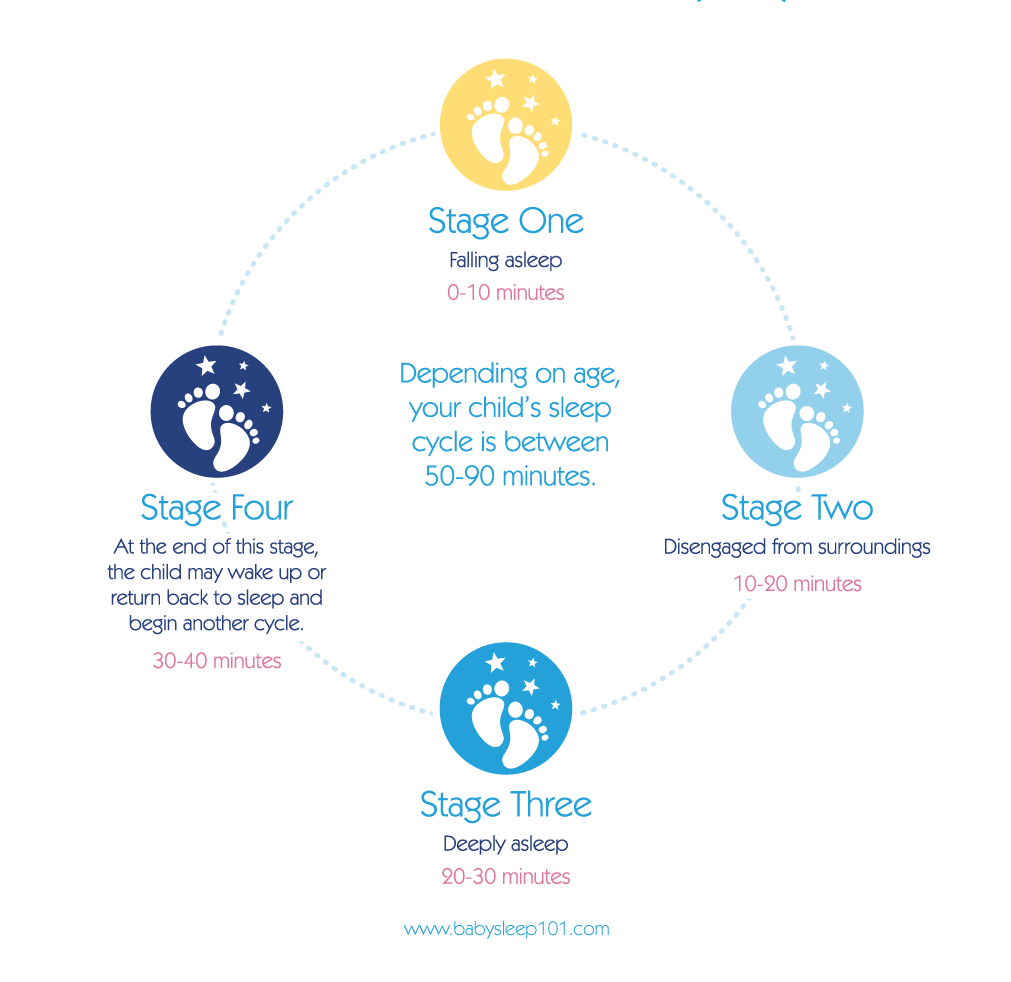 What To Do When Your Child Becomes Sick

If you find yourself in a similar situation, I strongly encourage you to do what feels right for you, your family and your ill child.

I would also encourage you to give assistance according to the intensity of their illness.

Some tips to consider:

Should You Do Formal Sleep Training?

No one likes being ill so it’s important to make sure your child is as comfortable as possible when they are unwell. Unless it is a very minor cold, most of the time I recommend that parents pause sleep training.

As mentioned previously, you may still be able to keep a some-what consistent nap routine, as well as semi regular nap and bedtimes as well.

After all, sleep is one of nature’s best medicines.

But for doing the actual weaning of sleep associations (which is what sleep training is *only* to be used for ), then most of the time we need to pause.
I know the concern is that we may undo all of the progress that has already happened, but you don’t need to worry about this.

First,  when it comes to actually helping them fall asleep, we want to only do as much as needed. And this will vary according to the severity of the illness.

Second, if they were already partly on track with sleep skills, then these skills don’t dissappear. You can get back on track when they are feeling better.

When To Get Back On Track

If your child becomes accustomed to a certain situation when they are unwell, they can form sleep associations or learned habits. And sometimes we need to take an active approach to changing the habits.

If this is the case, when you feel that your child is ready, you need to be confident in allowing them to sleep alone, as they normally would.

In general, I like to wait until the child has been feeling 100% better for several days before resuming formal sleep training.

In the days leading up to this however, you can always start to get back to a more scheduled day if you weren’t before.

Do whatever you need to do to help your child feel comfortable while they’re ill.

When it comes to sleep; try to soothe them as much as is necessary, without doing more than is needed. This way you lessen the chance of  habits forming during the time that they are sick.

Should bad sleep habits form after you had already started sleep training, remember that your child still has sleep skills. They have not vanished all together, they simply need to be refreshed. Children are very capable of learning and relearning, it just takes time and persistence.

Worst-case scenario; for severe cold and flus; don’t worry about creating bad sleep habits because you can always re-teach and undo any associations, once they are back to full health.